When Life Comes Back to Bite You

This second book in the Jean Rubin Series continues the hilarious account of Jean’s stressed out life. Now that her daughter safely married off and she has dealt with murder, new in-laws and assorted mayhem she is expecting some peace and quiet. Uh…no. Out of nowhere, her confused son shows up with his pregnant girlfriend and they move in causing an upheaval of family dynamics. All the while a major scam is developing in Scottsdale threatening to ensnare Jean and Maury. To make matters even more complicated they lose patience with the direction of local politics and decide to take a hand. All this makes for a roller coaster story filled with smart dialog, constant action, and wickedly funny satire. There are two kinds of people in Scottsdale: Those who are angry because they think they are in the book and those who are angry because they think they’re not.

Fine presents a breezy slice of life through Jean Rubin. As Rubin navigates her demanding family, life in Scottsdale reveals its own obstacles. She learns how to achieve serenity with some major shifts in attitude and firm choices. Side-splitting fun!
—Gail Fisher, columnist and author

Award-winning author, Marcia Fine has written seven novels. A lifelong learner with a penchant for humor and adventure, she has written the only satirical series about Scottsdale. Award-winning author and speaker Marcia Fine has also written THE BLIND EYE–A Sephardic Journey, historical fiction chosen by the state library of Arizona for ONEBOOKAZ 2015. PAPER CHILDREN–AnImmigrant’s Legacy has been a finalist for three national prizes. PARIS LAMB, her sixth novel, deals with anti-Semitism in the 1950s. Her next novel, HIDDEN ONES released in 2017, examines conversos in Mexico during the Inquisition. Marcia has a BA from Florida State University and a Masters from Arizona StateUniversity. 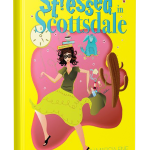 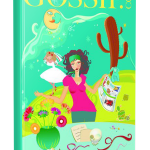