Why Am I Feminist?

Movie stars, bosses, newscasters, Supreme Court Justice nominees, the President of the United States. What do they all have in common? They are men who have harassed women, sometimes violently. Often I am asked: So why are you a feminist? It is not because of the behavior of these men. I’ve been like this for a long time. If you want to place blame somewhere, we can begin with my parents.

Reggie, an artist, and George, a musician, are responsible. When I was nineteen my father, who was a great reader, gave me a copy of THE SECOND SEX by Simone de Beauvoir. I won’t tell you I understood it all, but I got the gist of it. Women were treated as less because of their sex. Yes, there were those who said we were hysterical, incapable of intelligent decisions and unworthy of higher office. Today it is accepted in some circles that the rise of women in the workplace has ruined our economy. If only those ladies stayed home and made babies! I did for a time and taught my daughter and son to be feminists. 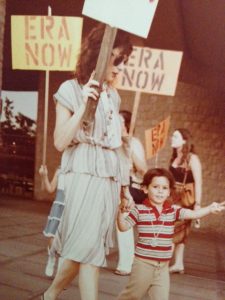 Marching for equality in front of a Phyliss Schlafly speech. 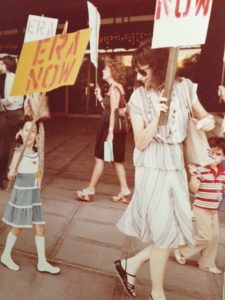 What I learned in college was to be cautious. Whether I was being chased around a geology professor’s desk or stuck at a fraternity party with a drunk date, I had to take care of myself. I made pacts with friends to return at a certain time. I always let others know where I was going. If I stayed late at the library I had a campus cop walk me back to my dormitory. Yes, times were simpler. It raised my awareness that I could be in danger.

When I began modeling in my late teens at a local department store, my mother put her engagement ring on the fourth finger of my left hand and sent me with a robe in my round hatbox. Yes, I was the only model covered as the male manager strolled through gabbing while the others grabbed for clothes. How did she know he would focus on me so that I stumbled over my lie as I held out my hand? My mother was smart. She said, “Tell him you’re taken.” I did. 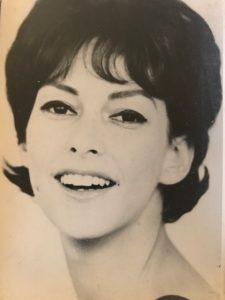 Marcia Fine at the age of 19

It was only later, after I had my first baby, that I attended a NOW convention and found out no one could “take” me. I had to go willingly. I also learned about the AT&T supervisors who were paid less than men. Economics has been the backbone of the Women’s Movement from the beginning. Today, decades later, women earn 87 cents for every dollar a man does. I may not have looked as radical as the women in combat boots without makeup, but I was in their camp. I felt women needed to have the same rights and benefits as men. Why were we not being treated equally?

Many laws have been changed over the years, including the right to choose what to do with your own body. Yet, there are vestiges of prejudice about what women want, including the protests from the Me Too movement. I am a feminist because I believe in the power of women. We can make a difference. We learned from our mothers and grandmothers who suffered indignities from bosses who cracked glass ceilings, from women sitting on the highest court in the land, but we haven’t had a female President yet. Women have a great deal to bring to the table, including military service, organization (if you have a child you understand), budgeting, work experience and now politics.

What would happen if many women won seats in Congress this election? I can assume most would not be enthusiastic about starting wars, there would not be children locked in cages at our border and everyone would have enough to eat. It’s a mindset. Feminism means political, economic and social equality for the sexes. We are not asking for more. Just equal. So why am I feminist? How could I not be?! 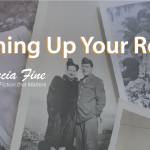