Rhodes, An Island of Paradise

Why Rhodes? I visit the places I write about for my Historical Fiction novels. The details that enhance the senses make for a good story. And, the research for this one is captivating! 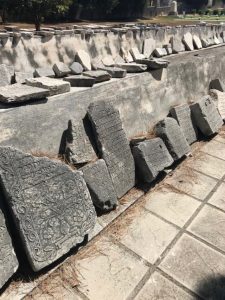 I took this photo in the Rhodes cemetery. It shows the damaged headstones the governor, de Vecchio,
used to build his mansion. He said it was supposed to be Mussolini’s summer home.

Jews have had a presence on the island where the Mediterranean and Aegean seas meet for 2400 years. That makes for many ruins, moats, Gothic arches, and interesting architecture, all behind medieval walls, some of which still have cannonballs in them. With a long history of conquerors that includes Persians, Romans, Greeks, Ottomans, Arabs, Byzantines, the Knights of the Hospitaller in the 1300s  who erected the medieval walls that cloister the Old City as well as the Palace of Grand Master of the Knights. In modern times, the Italians and Nazis were occupiers.

Today Rhodes, a modern city with an Old Town that reaches the Mandraki harbor with small beaches, yachts and cruise ships, remains striking with black and white cobblestoned streets.  Packed with tourists and an array of appealing items to buy from stylish white clothes, leather items, and jewelry, goods are plentiful. Every exchange with the people in the shops becomes a pleasant one. Why? Eighty percent of the island is employed and they cooperate to make the best experience for visitors. They work six months a year from May to October and then wait for the next season. A safe area, with families out late at night when the ocean breezes cool the air, many tourist sites stay open. And, for those who adore the Mediterranean diet, there’s fresh, delicious food everywhere! 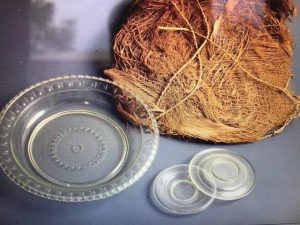 Actual plates found in the Cave of Letters excavated by biblical archaeologist, Dr. Richard Freund, that belonged to Babatha, a businesswoman who owned date farms in 150 BCE in Israel.

Families known as Rhodeslis from all over the world participated in the 75th Commemoration (July19-24, 2019) of the 1604 Jews taken on July 23, 1944, by the Nazis, with a stop at another nearby island, Kos, to arrest another 100 Jews. It was the longest journey of the Holocaust taking almost two weeks. Those souls were the last in the ovens of Auschwitz at the end of the war when some concentration camps were being liberated. It’s a shocking history that wiped out a close-knit community. Only 150 returned to their island paradise. Today 15 Jews live in Rhodes. Those who were fortunate joined Rhodeslis communities in Rhodesia, Morocco, Seattle, Los Angeles, and New York. 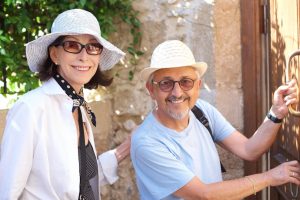 With Isaac Habib who lives on Rhodes and gives daily tours. His mother grew up on Rhodes and was one of nine women who returned after WWII.

Rhodes would be ideal for an educational family trip. Many will relate to the history by walking the streets of the Juderia and visiting the exquisite Kahal Shalom (1577). Whether you’re grandparents looking for a family beach resort or honeymooners seeking privacy, there’s an abundance of sites to see, including the Castle of the Knights, the Archaeology Museum and the Aquarium. Whether you take side trips to the village of Lindos for a view of the lit Acropolis or a ride on a catamaran to Kos, a charming smaller island, fresh Mediterranean cuisine awaits you at the highest level as well as street food and friendly, service-oriented people. Rhodes has much to offer! 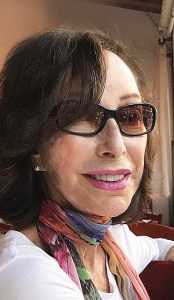 Marcia Fine’s novel, Love and Death in Rhodes—A Novella of Biblical Proportions, will be available in early 2020. – Pre-Order Today!

For more novels, visit the SHOP 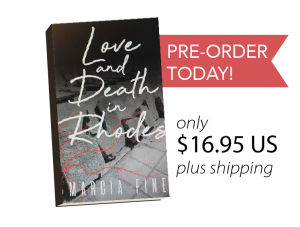 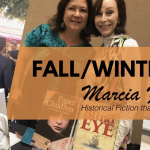